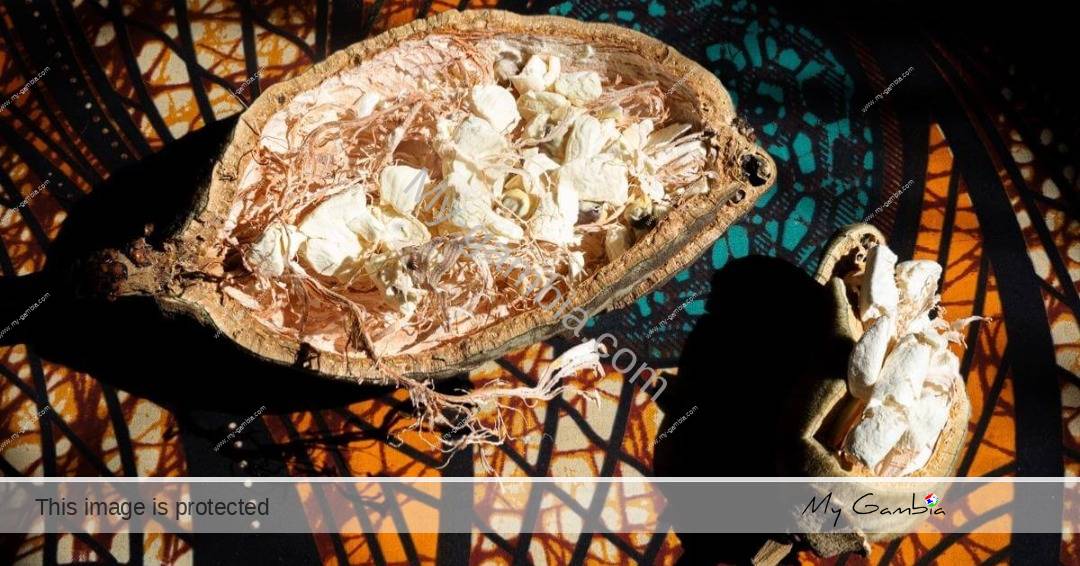 Fruit of the month: Baobab

4 min
The genus name of the baobab is Adansonia. Adansonia is divided into eight species called Adansonia digitata, Adansonia grandidieri, Adansonia gregorii, Adansonia rubtrostipa etc. In The Gambia, baobab is popularly called Sitou in Mandinka and Bouyi in the Wollof. Baobab can grow from a small 5 metres tree into 30 metres tall giant.

There are many stories and myths associated with the tree as it has an unusual structure and resembles a tree that has been turned upside down. Many tribes believe the baobab tree has spiritual powers, and it also plays an important part in the initiation rites in certain cultures.

The baobab fruit is oval berry-like with a hard shell coated with greeny fur, and it hangs from the baobab tree on a long wooden stalk. The greeny fur turns brown when it is ripe for eating. The hair usually causes an itchy feeling when it touches your skin. The locals always scrap the coat of the baobab to reveal the black hardshell, which breaks upon hit. Under the shell hide the dry pulp chunks that hold the dark bean-like seeds intertwined with the fibres. 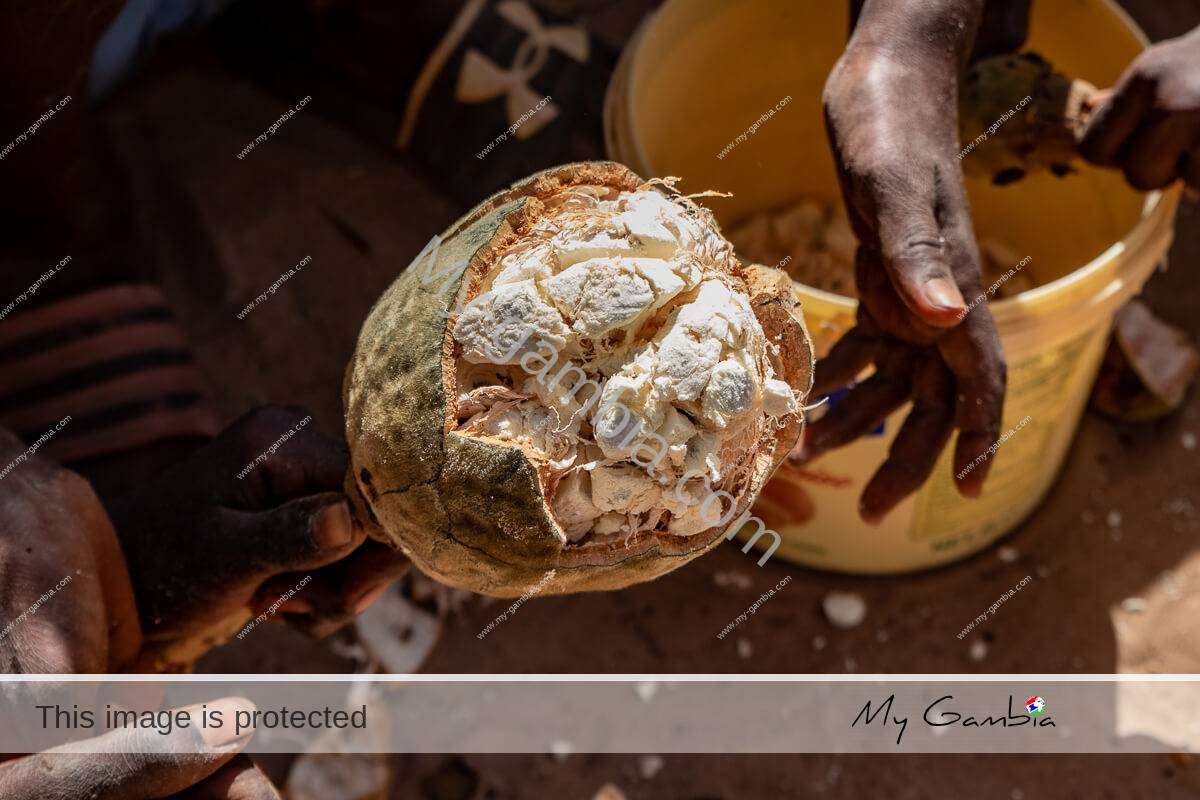 The baobab tree in The Gambia is mostly found in the forests, and it is considered a wild fruit. The fruit takes six months to mature fully; therefore, the baobab can be harvested twice a year. Some of it is imported from countries like Guinea Bissau, Conakry, Senegal etc. You can buy the baobab fruit at every local grocery store or market, usually in the form of ready-made powder or in the original form of dried pulp already removed from the hard shell.

Every part of the baobab is useful in The Gambia. The leaves are used as remedies. Baobab leaves, bark, and fruit are used to cure many ailments like fever, malaria, tuberculosis, toothaches and stimulate the immune system. The fruit is used for making juice or desserts. Baobab juice, baobab cream, baobab ice, and more. The fruit is also used to relieve stomach aches and diarrhoea. The trunk is used as wood for cooking, making of ropes and clothing. 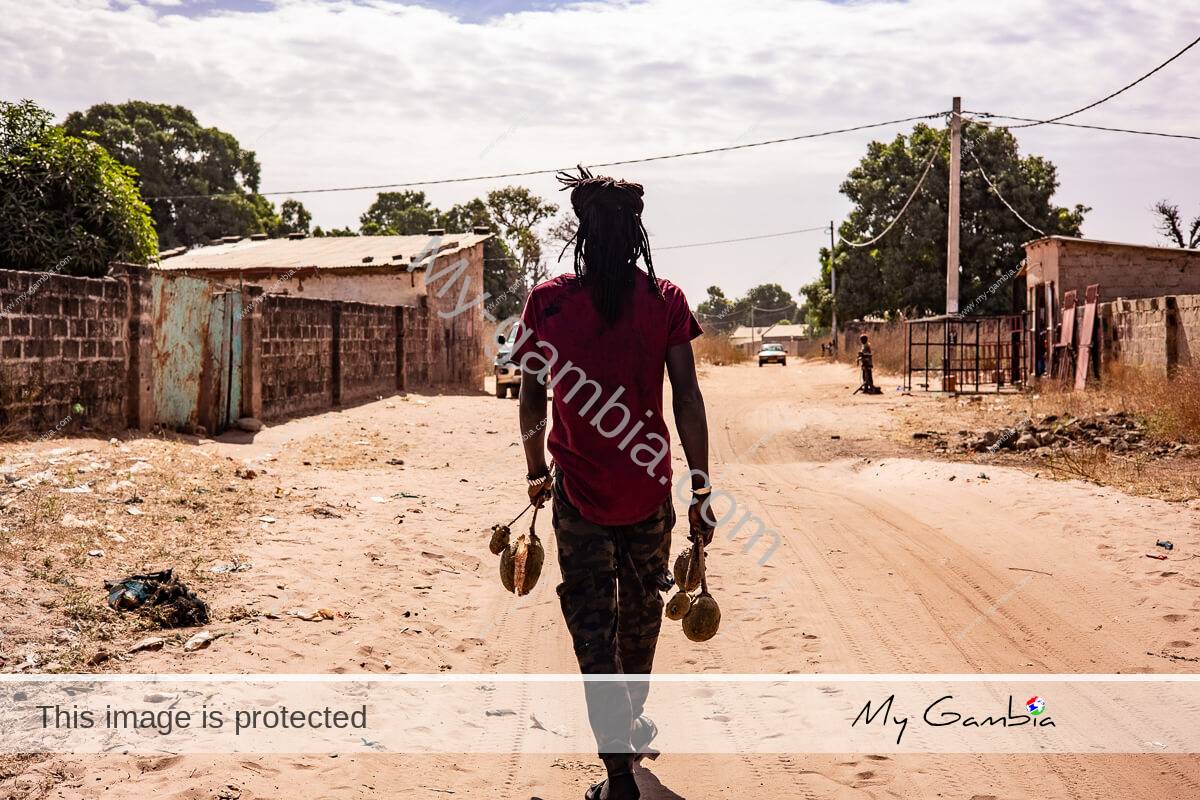 The latest discovery in The Gambia is the use of the baobab seed, which till now has been thrown away (which was beneficial to the number of seeded trees today) after taking the fruity white part off of it. The seed is a source of oil that has many beneficial properties for the skin and hair known worldwide. A small company, Khadija Baobab Oil, began processing the baobab seeds into oil not long ago, so now, baobab oil is also available in the Gambian market.

The superfruit, nowadays well known all over the world, has many benefits. It is full of vitamins and minerals, can aid weight loss, reduces inflammation and blood sugar levels, speeds up digestion, and is full of nutrients. Therefore, it is a perfect choice to add to many diets. It is, after all, the fruit from the tree of life.

Bird of the month: Malachite Kingfisher

Henna beautification
Henna is a temporary body tattoo using a particular henna dye. The dye is made from a plant called Lawsonia Inermis or Egyptian Privet. It is used to ...
Read more
Creating a magical world: Freedom
“Kasumai – How are you?” The word “Kasumai” is used in the language of the Diola (also Jola), an ethnic group (or tribal group) that also li...
Read more
Mediterranean feel on the cliff
If you are looking for accommodation away from the bustling tourist area to enjoy a tranquil vacation, then this could be your next temporary home for...
Read more
Gambian Sounds: Phoenix Band
My Gambia team first knew about the Phoenix Reggae Band when invited to the Christmas Eve Dinner at Coco Ocean. We instantly felt the good energy of t...
Read more