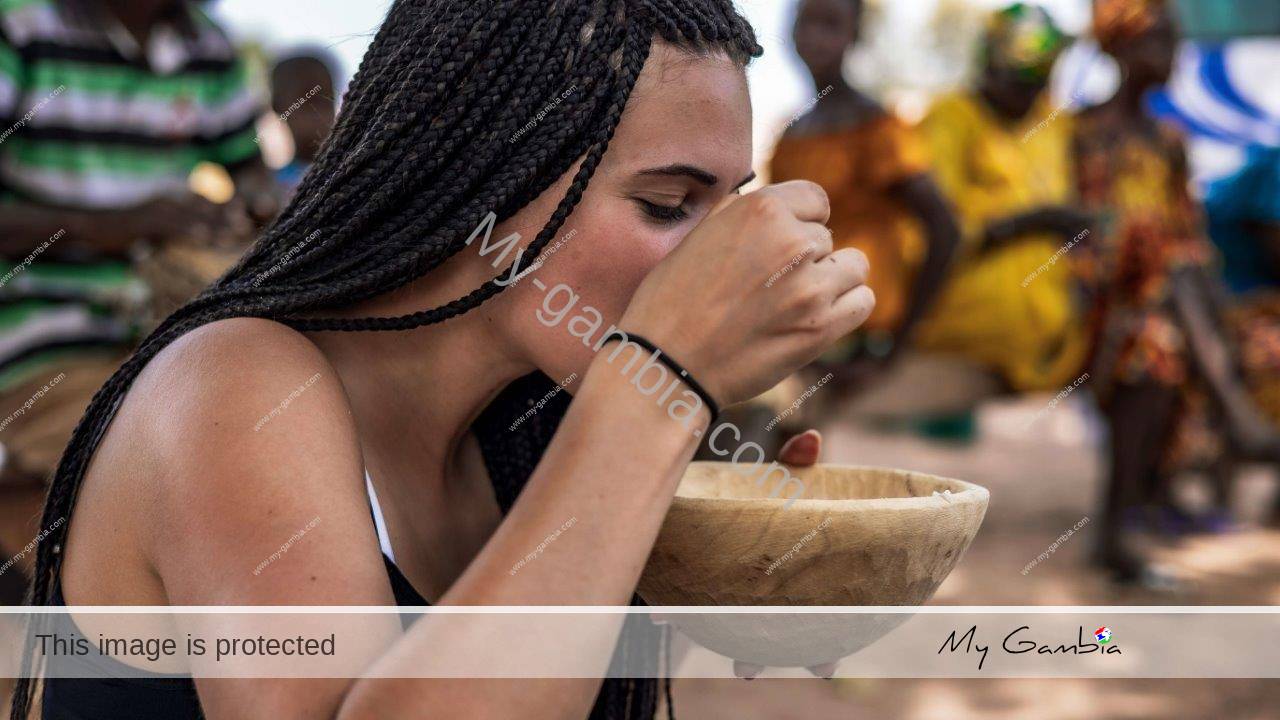 How Did Community-Based Tourism Arrive in Janjanbureh?

9 min
Author: Jane Smith
On September 30th 2021, I received photos of a Tourist Information Office which had opened its doors that day in Janjanbureh CRR, miles away from the coast. It gladdened my heart so much; as a charity I founded 12 years ago has been part of that story, and the four people employed there are all members of JUST ACT.

JUST ACT developed in 2015 from the charity Janjanbureh Uniting Sustainable Tourism and Community Training, or Just Act Gambia for short.

After visiting regularly since 2004, I had spent many hours discussing the history and culture of Janjanbureh with my host's brother, the late Hon Foday Jibani Manka. In February 2009, I uttered the immortal words "What you need, Foday, is a Tourist Information Centre and we need to train local young people to be Tour Guides". It was decided to set up a charity to support this. It pays to be persistent and patient! Whilst this opening is not the work of the charity, its foundation played a part in it.

Foday visited my UK home town in October 2009 and visited the local TIC. He approved the suggested name Just Act Gambia standing for Janjanbureh Uniting Sustainable Tourism And Community Training which summed up its purpose.

The first aim was the Tour Guides initiative. The long-protracted development can be followed here, but briefly:

The formation of JUST ACT 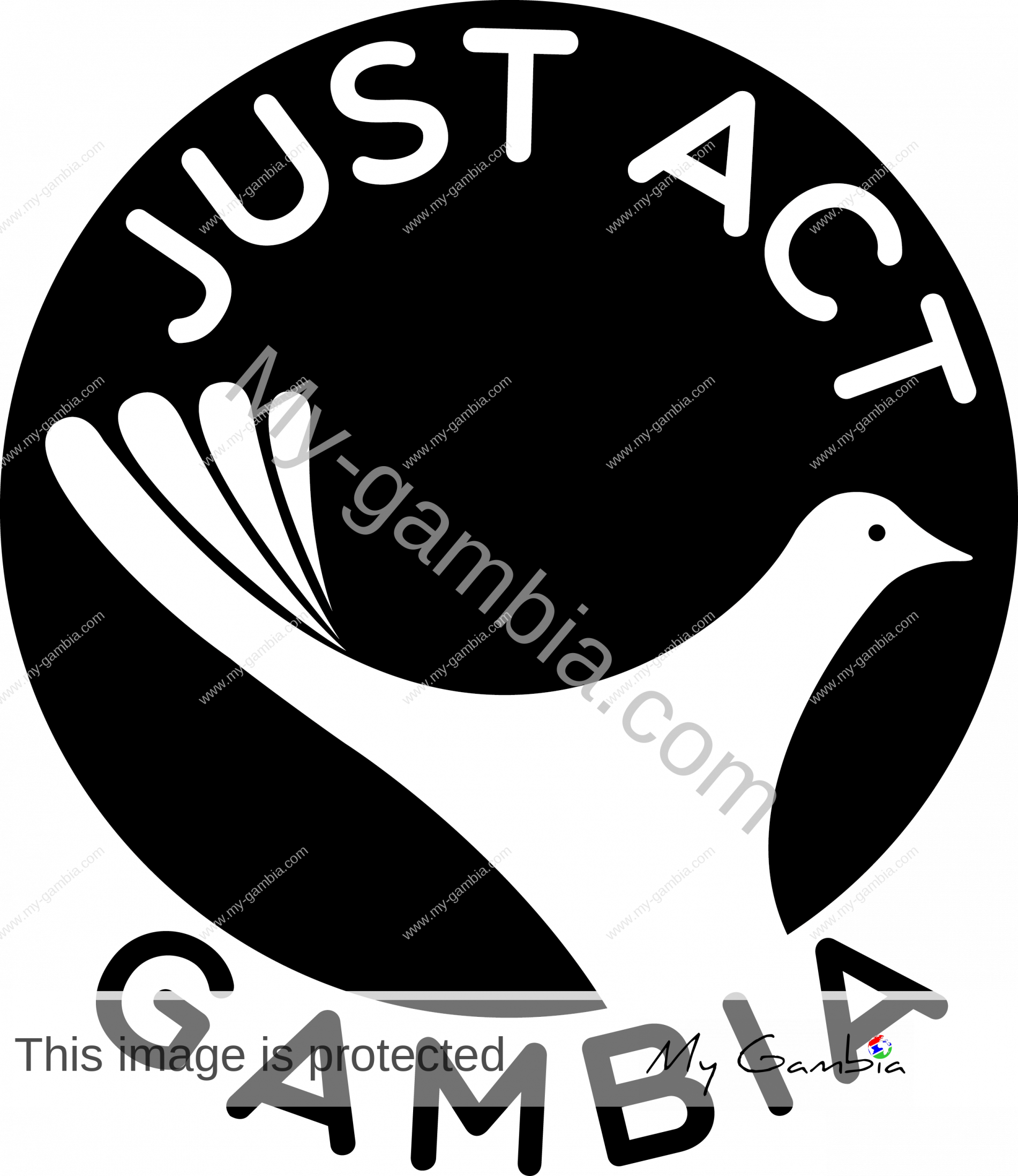 In 2015 Key people with whom I worked registered JUST ACT as a National Youth Council organisation and is recognised as a charity by the AG Chambers. This enabled access to a variety of training and support over the years, and gradually through the sterling work of Omar Jammeh and the dedicated work of its committee, its name became known throughout the country. The work of the tour guides gradually increased.

Unfortunately, political unrest in the 2016/17 season meant tourists were evacuated after President Jammeh refused to accept the result of the Presidential election. However, with the new Presidency established, funding from Europe was accessible again.

JUST ACT had put forward the proposal to YEP supported by funding from Just Act Gambia for Sustainable Tourism in Janjanbureh.

In November 2017 came the amazing news that Janjanbureh was to be developed as a second destination for tourists, providing an alternative to the traditional coastal resorts of sun, sea and sand, starting with fresh training of tour guides. Read the blog here. Conveying my excitement! It was run by ITTOG (Institute of Travel and Tourism of The Gambia), NCAC (National Centre for Arts and Culture) and funded by Youth Empowerment Project (YEP), but fourteen young people were trained as guides.

In the next stage, five of the fourteen guides were selected to receive high-level training by YEP tourism consultants in partnership with NYC, GTB and NCAC and to extend this training to new regions of The Gambia provided by two consultants from the International Trade Centre (ITC) both based in Thailand, Potjana Suansri and Peter Richards. 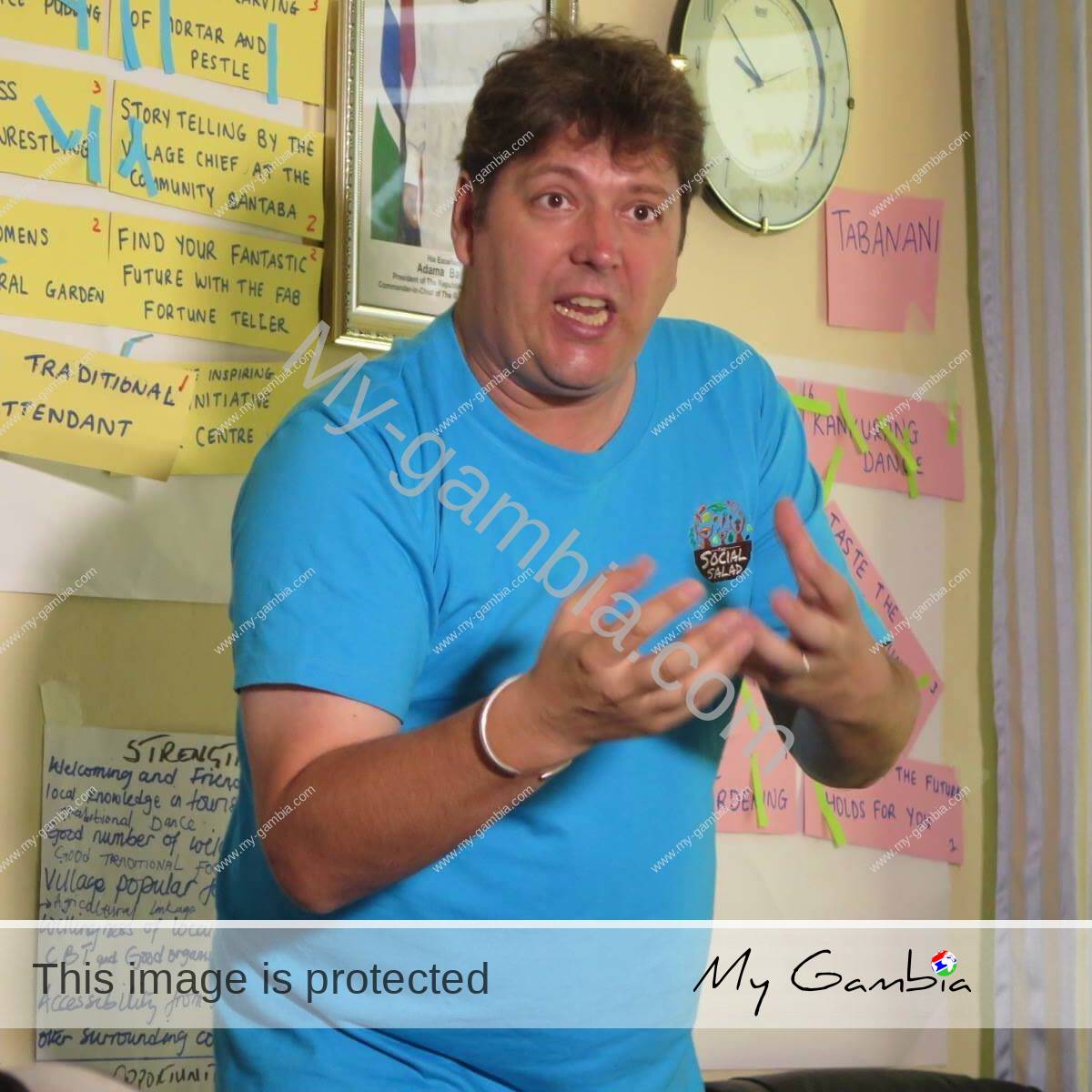 These five became Trainers of Trainers or TOTs, Jalamang Danso, Isatou Foon, Omar Jammeh, Muhammed Jawneh and Muhammed Kebbeh. They trained alongside Master Trainers and representatives from GTB, ITTOG, GTHI and NCAC. You will recognise some of these names from further articles in My Gambia.

Another major step was the link formed with Naturefriends International through links with Adama Bah. Although NatureFriends International had long-time links with Senegal, they were making their first group visit through Landscape of the Year on the African continent, bringing over 70 European guests. The first Kankurang Festival was timed to fit with this visit as reported here. JUST ACT members were heavily involved in its planning and implementation. Through the success of this relationship, JUST ACT now has a C category membership with them, meaning they are partners without voting rights, which has led to funded initiatives from them. 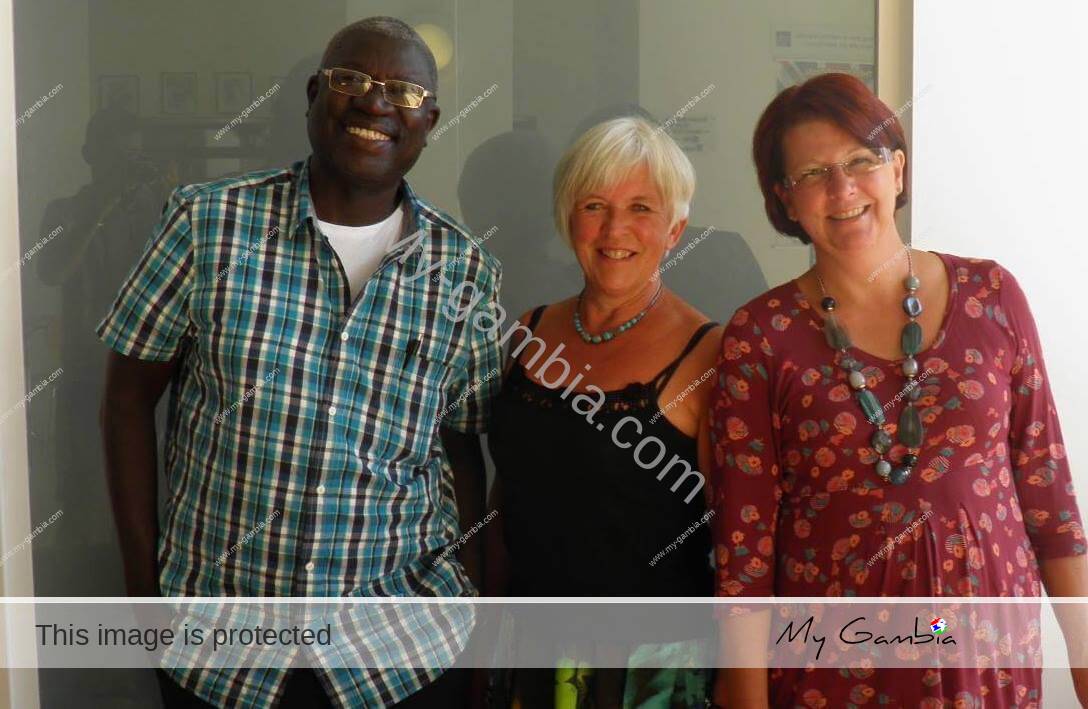 Community-Based Tourism was introduced in March 2018

"Is high time for stakeholders in the tourism industry to begin diversifying in new forms of tourism... Community-Based Tourism through applying the right tools can be harnessed as an approach to support community development…."

In preparation, the TOTs were tasked with developing possible CBT with the nearby village of Jamali and Potjana, and Peter returned, bringing a new model of training, 'Fresh from the Field.' 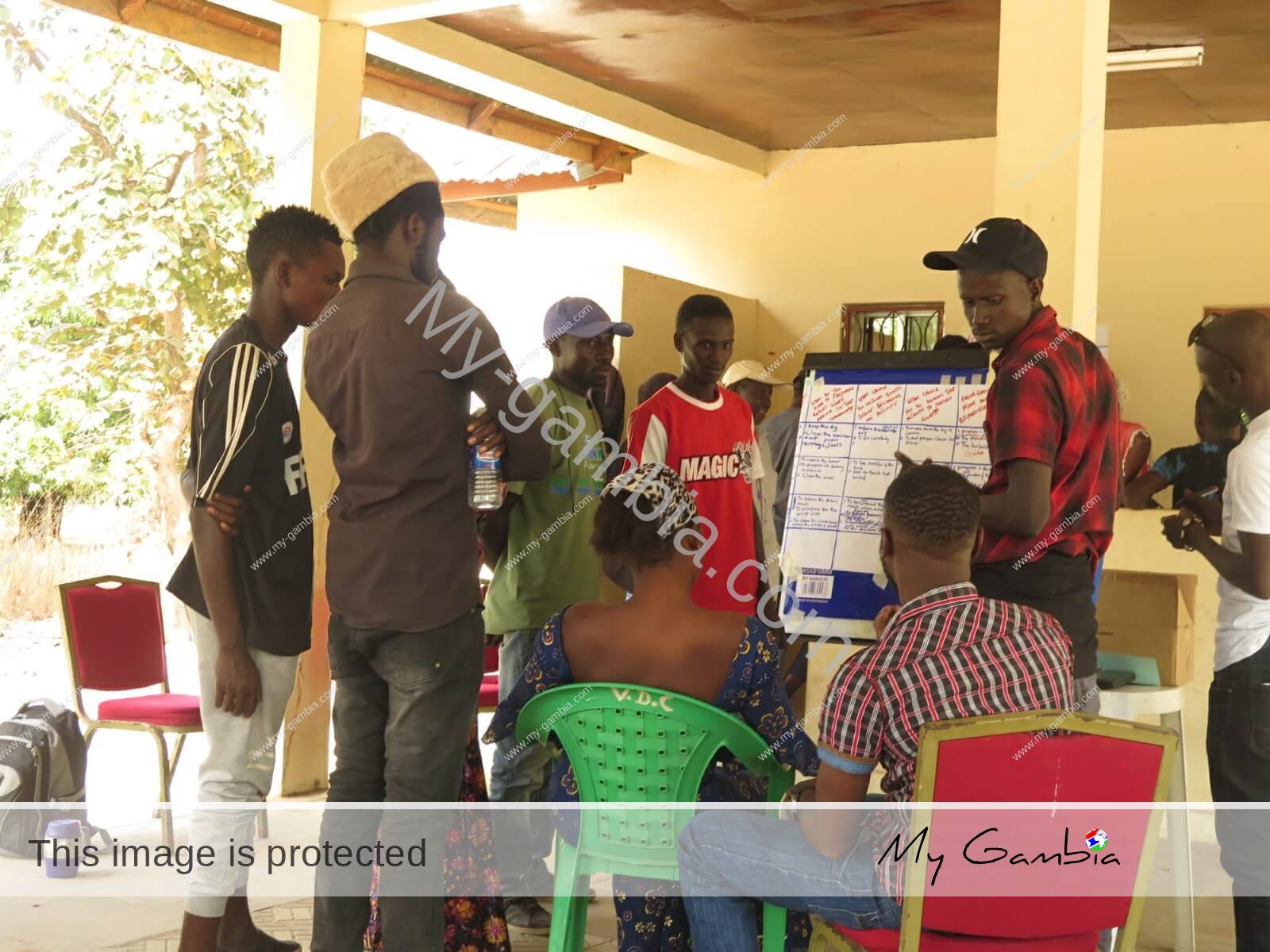 This page provides real insight into the principles of CBT, but an extract training was based on these principles:

"It revealed great potential for communities to offer and enable guests to interact through cultural exchange and preserve their norms and values without distorting or commercialising their beautiful culture…."

Progress continued throughout the following years as reading through the many blogs will testify, e.g.: a study group from Canada, EU Trust Fund visit Janjanbureh.

Dave Adams of Fair Play Gambia now lives in the area and has long been associated with JUST ACT. Fair Play Gambia and JUST ACT were successful in gaining funding for Youth Empowerment Project in equipping to a very high standard and training Kayak Tour Guides. I was pleased to be present during the two weeks of training provided by Darren Sherwood and Chris Brain. 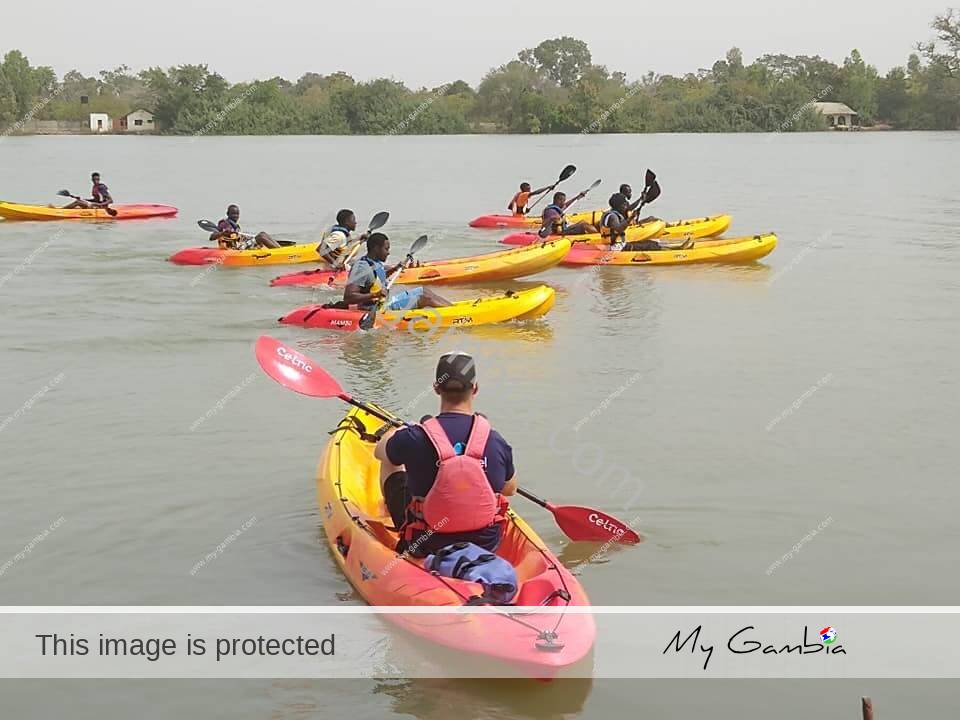 Despite the pandemic having a profound effect on tourism, the Annual Kankurang Festival continued in a modified form attracting more Gambians and those Europeans living permanently in the country. In January 2022, the three-day festival was restored. 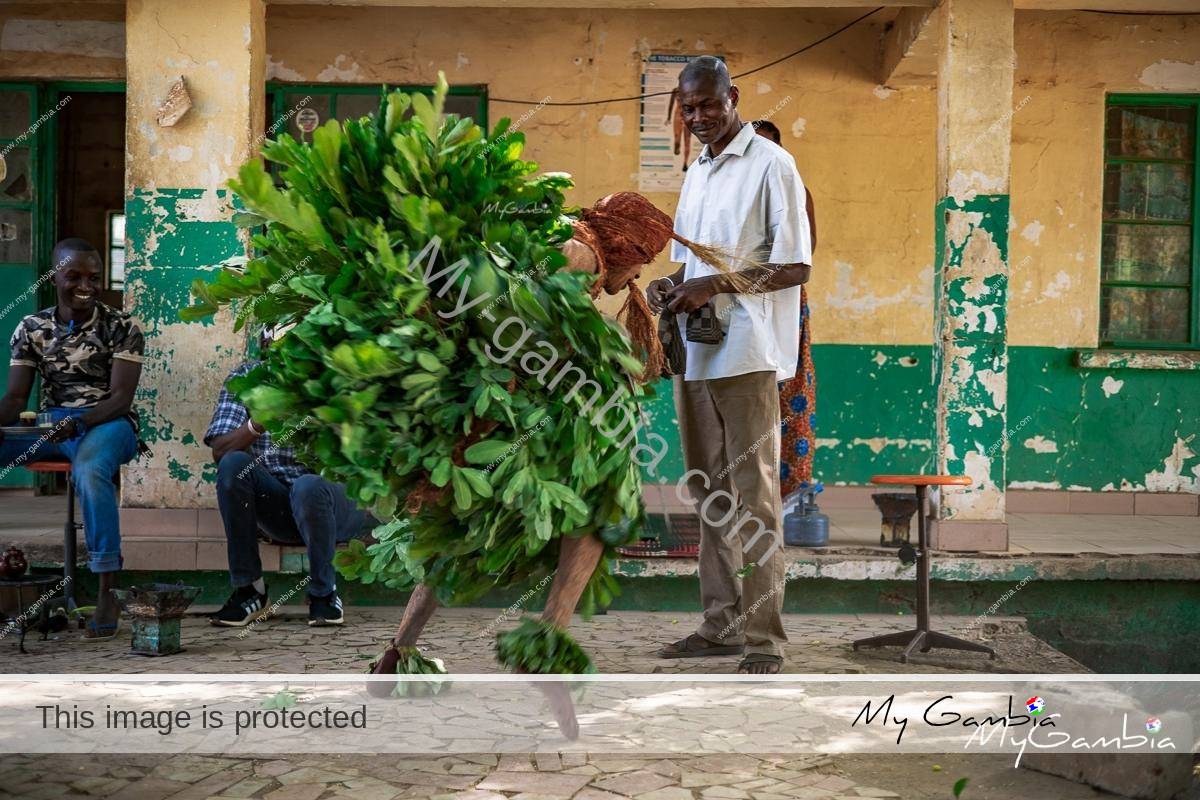 So, How has Janjanbureh and the surrounding areas benefitted from the introduction of Community Based Tourism?

Janjanbureh now has a base for visitors with the opening of the Information Centre employing four JUST ACT members who all received high-class training as Trainers of Trainers and/or Guides.

There are more than 20 tour guides covering traditional, kayaking and walking tours, all thus receiving an income.

The development of the tours in Janjanbureh and the villages of Tabanani and Jamali: 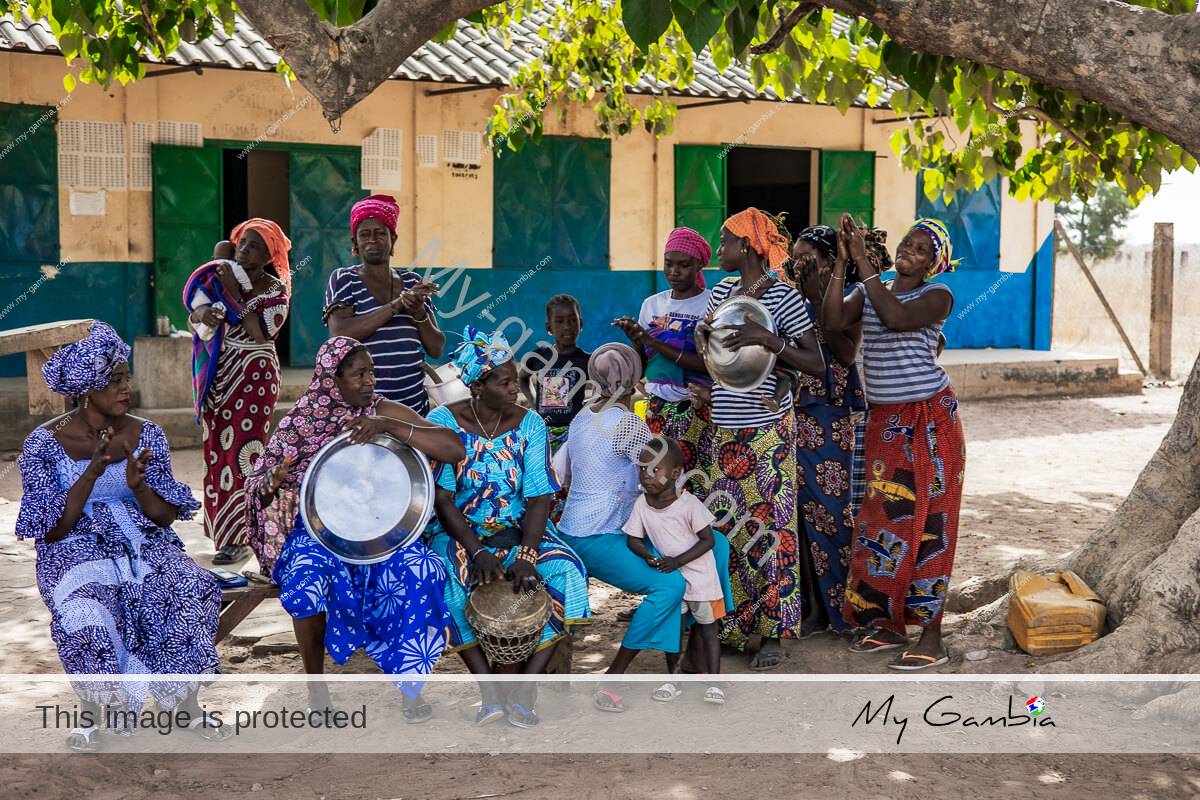 The newly established Tourist Visitor Centre will be a source for crafts, and indeed, an established women's group is formed and trained through the support of YEP and have tie-dyed and made the curtains etc. The showroom will present their produces, and no doubt will attract further times.

A further important aspect of NatureFriends International's involvement is funding two major initiatives. A Three-Year plan of planting mangroves to fight climate change and climate justice in CRR, annual interchange of pupils between Koungheul Senegal and Janjanbureh where pupils for inter-country friendship and understanding as well as covering a range of topics important to their future. 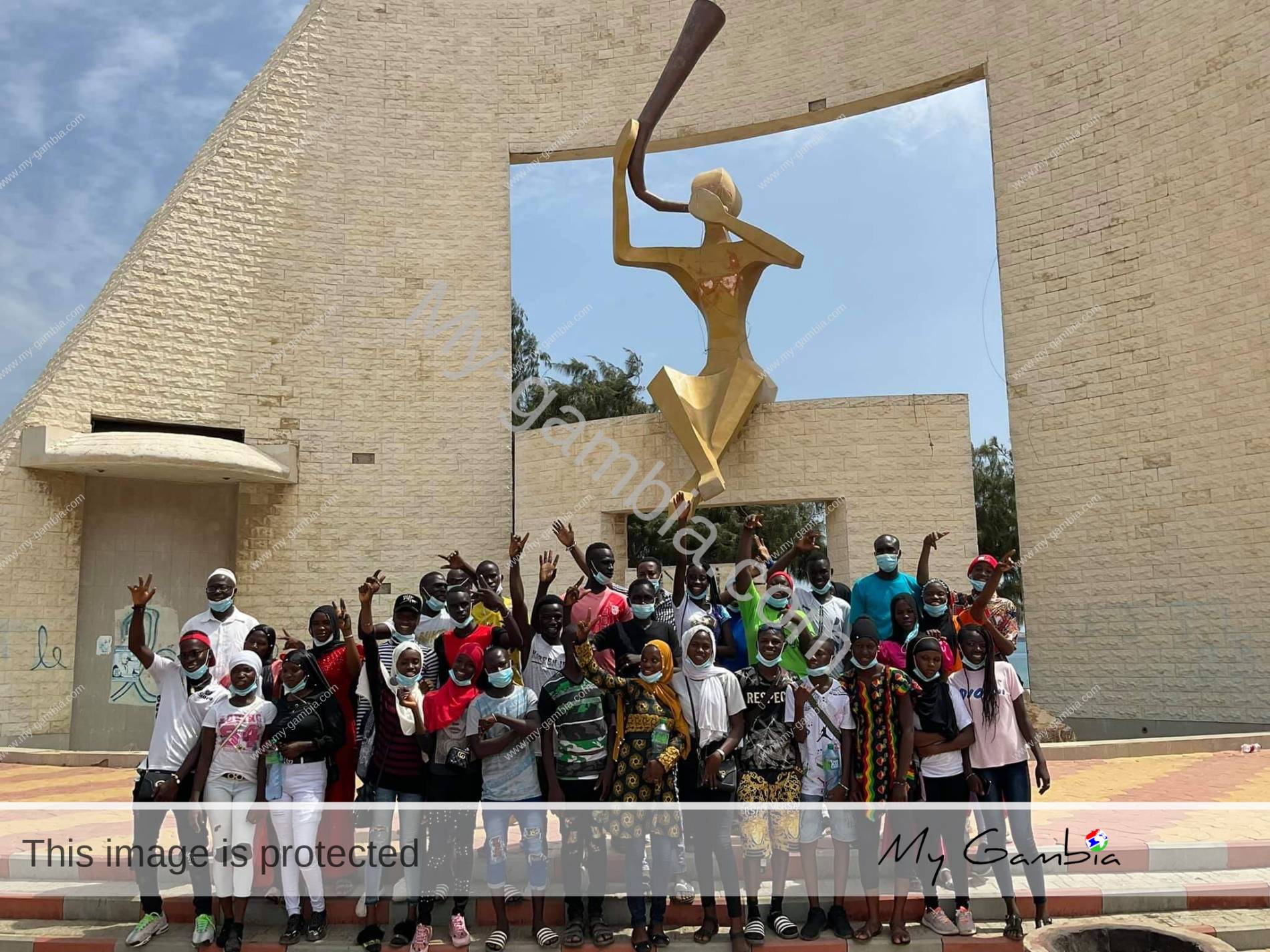 It is obvious that the benefit to the communities is wide-ranging and ever-expanding, and those visitors who come, know that they are supporting those communities in a very practical way.

It provides income for youths who might otherwise be tempted to migrate to the coast in search of jobs or indeed partake in irregular migration.

Even in this year of travel difficulties, several groups have experienced community-based tourism of Janjanbureh through the great organisation, Kids Are The World, with the collaboration of the online platform My Gambia.

Organise such a visit in this manner or direct with the new Visitor Information Centre. You know you will leave enhanced in every way with greater understanding. 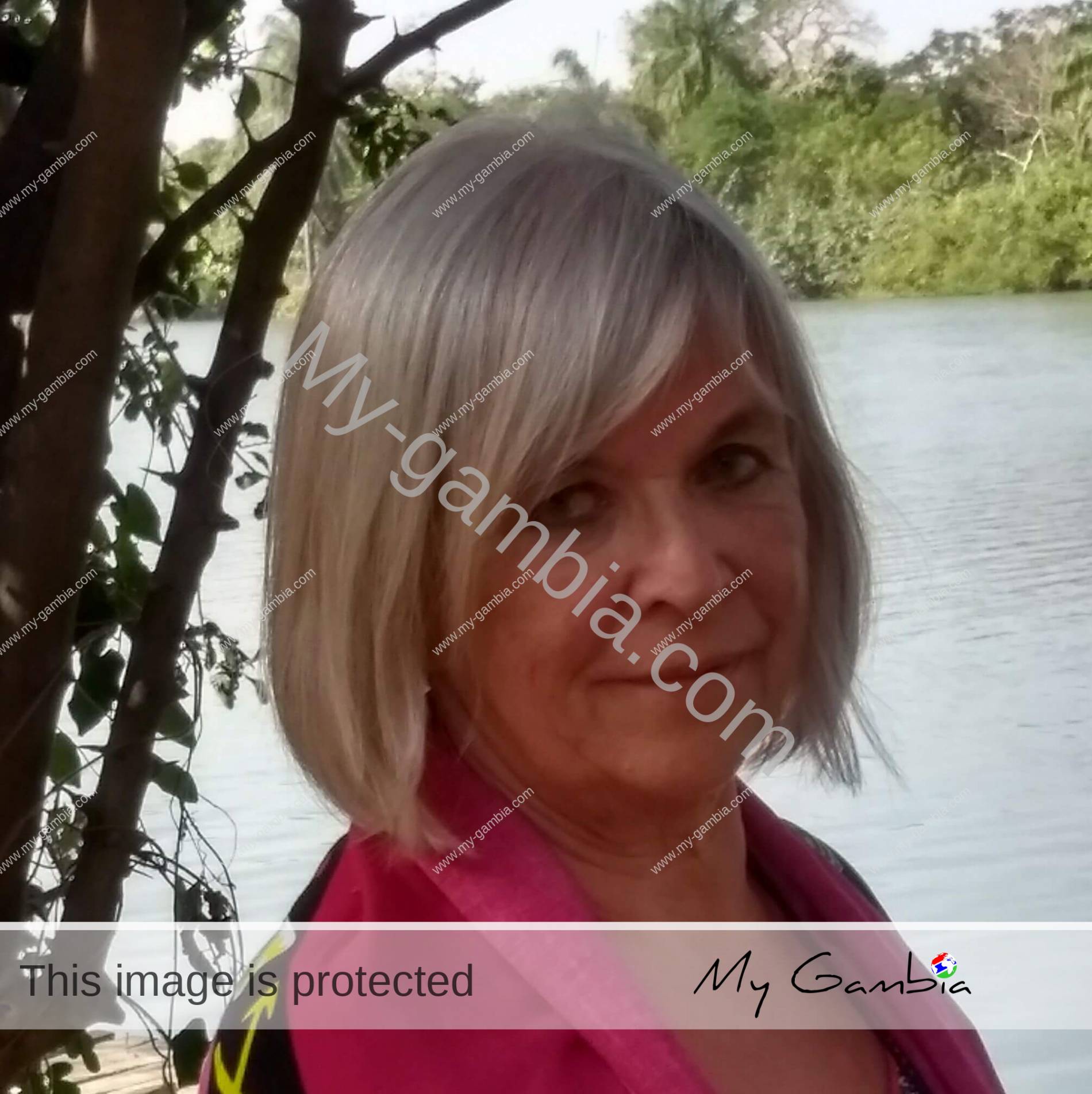 Jane Smith
Founder, Just Act Gambia
Jane first travelled to Janjanbureh, The Gambia, in February 2004 for just one week through an educational link. That was enough to capture her heart, and she decided to try and support the community in some small way. On subsequent visits, staying with Tida Manka, the then retired Head Teacher of the Methodist Lower Basic School, she met her brother, the late Foday Jibani Manka (later to become the National Assembly Member). Foday had immense historical and cultural knowledge of the island, and Jane felt this knowledge should be shared. Seeing some tourists coming to the island with guides from the coast, not always with accurate knowledge to convey, Jane suggested that some local young people should be trained to become local tour guides and that a local skills centre which she had supported from the onset should be used to provide training in providing goods and services for tourists. Thus began her main aim of training Official Local Tour Guides recognised by the Gambia Tourism Board. She decided that setting up a charitable status would be advisable. It was to be a long task and finally achieved but since 2017 has been superseded by a much greater initiative through YEP Gambia, which is chronicled elsewhere on this site. Just Act Gambia became a recognised charity in early 2010. Just Act Gambia has developed through collaboration with the local community and various initiatives in response to local needs.

PREVIOUS
Weather in July
NEXT 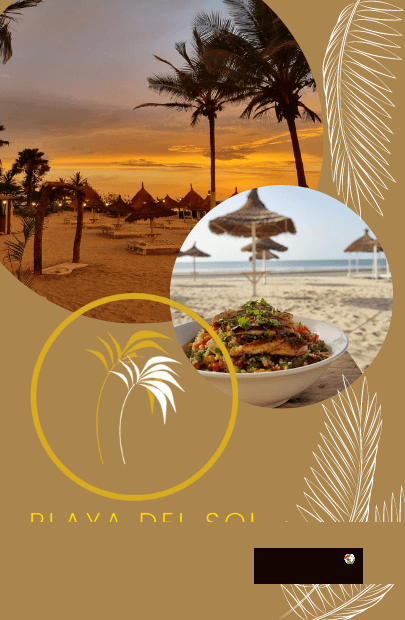 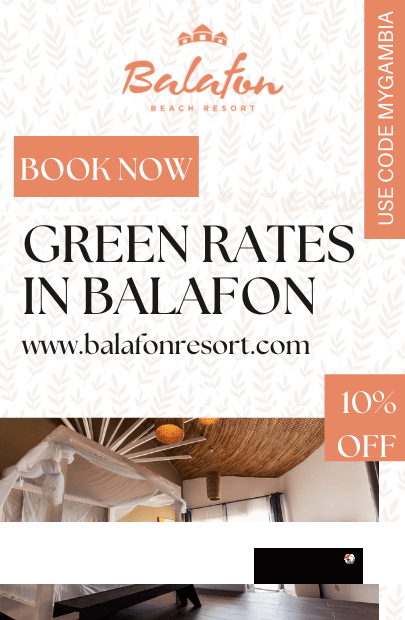 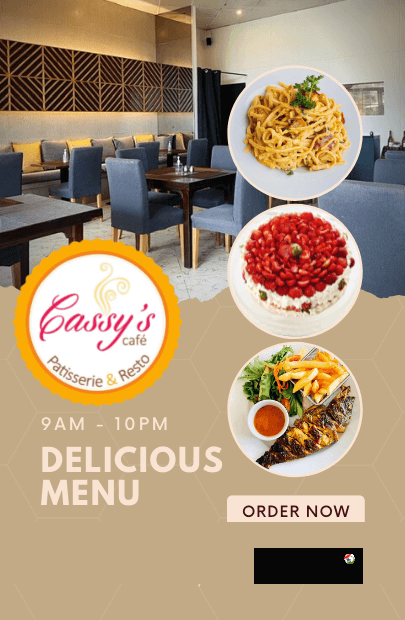 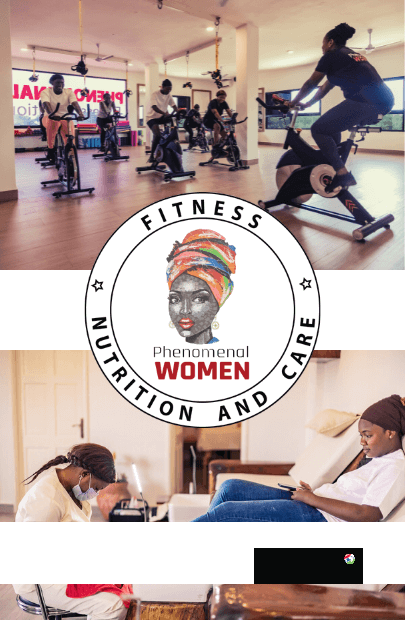 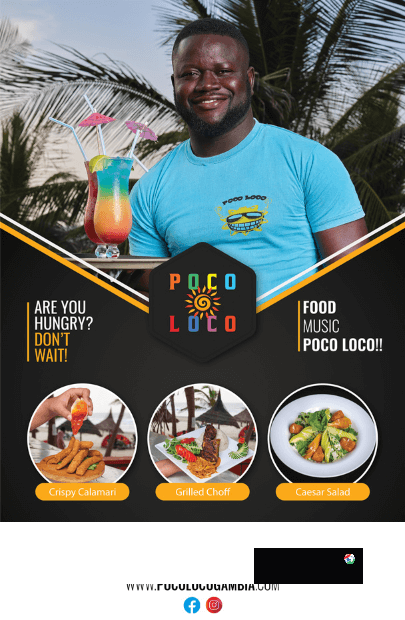 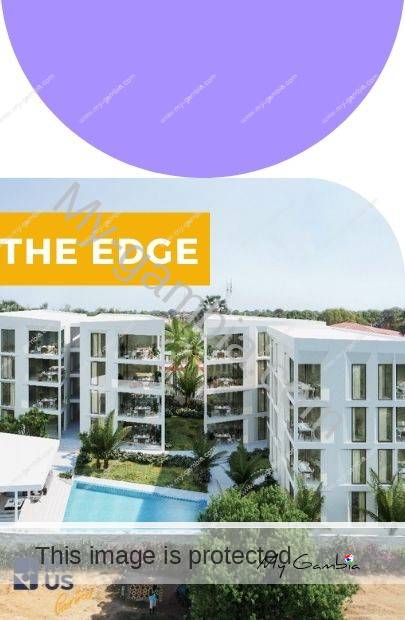 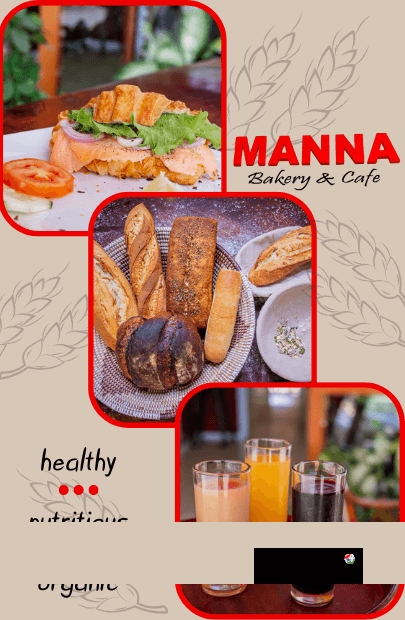 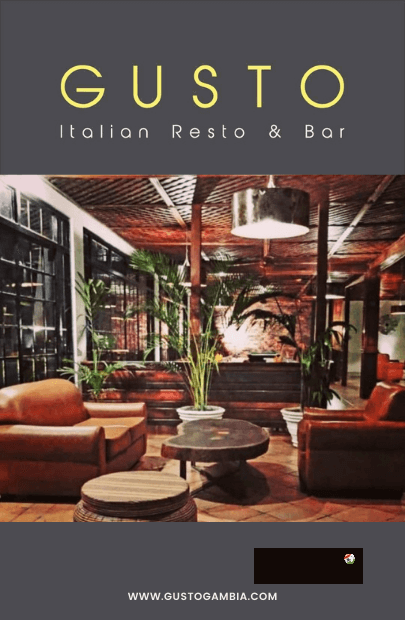 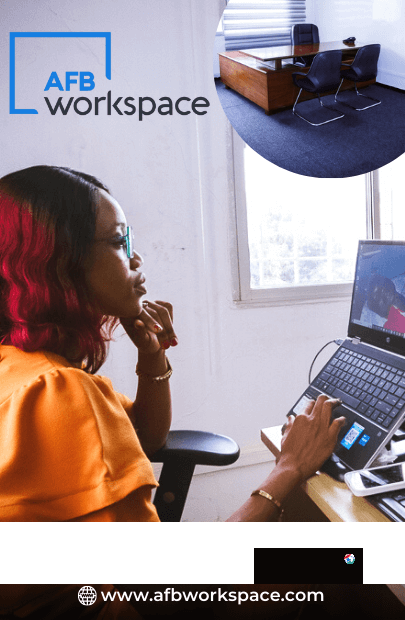 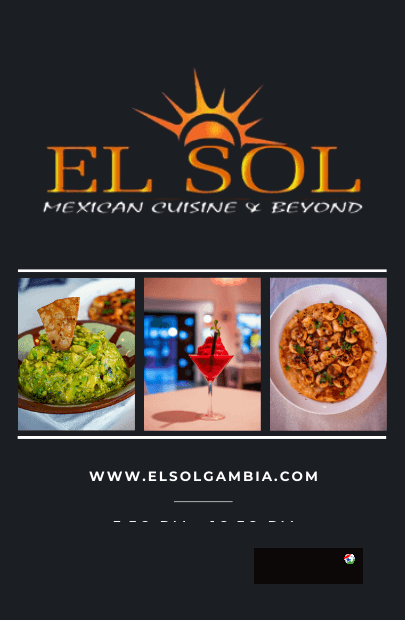 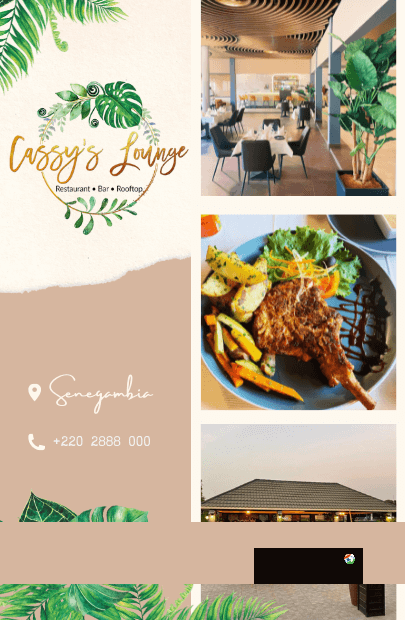 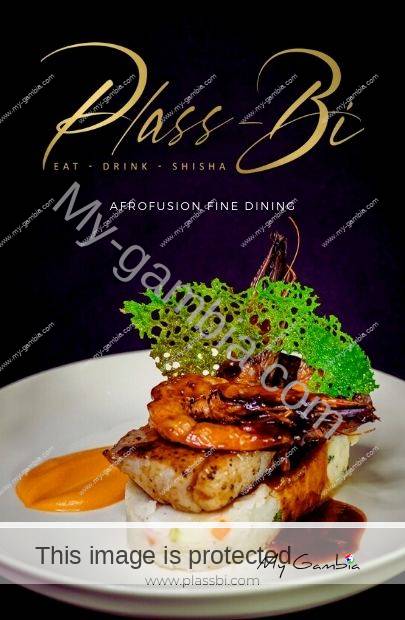 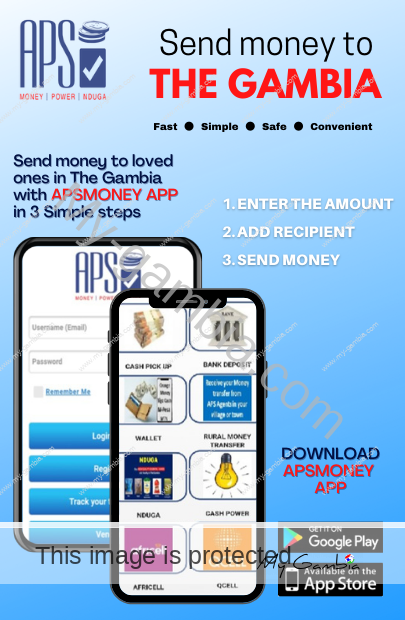 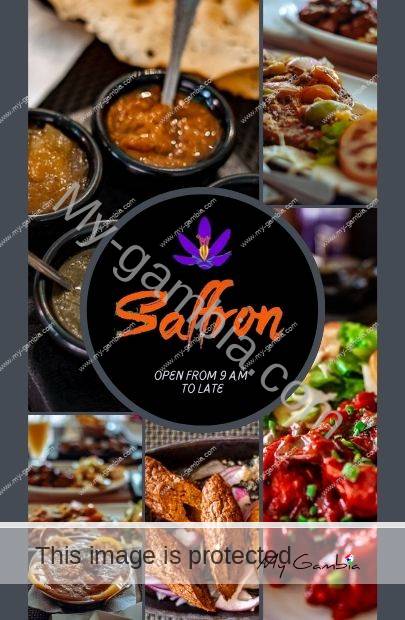 Yoga Bliss Gambia: Check in with your energetic center
Did you know that your sense of desire and determination is also connected to your chakras? Sacral chakra (Swadhisthana) and the Solar plexus (Manipur...
Read more
Interview with the creators of Brunch&
What started as a friendly game of golf became something that adds value to the lives of professionals, entrepreneurs, and executives here in The Gamb...
Read more
Bojang River Lodge Pool Open Daily to Visitors
One large pool with a bar and a smaller pool for children makes up the long-awaited newest addition to Bojang River Lodge....
Read more
Top Sunday Beach Spots
Over the past year, Sunday brunch has become a trendy weekend activity thanks to some of the best restaurants in The Gambia. We couldn't be more thril...
Read more